RANDY HENCKEN: We have identified 51 nations as an alternative to French Polynesia 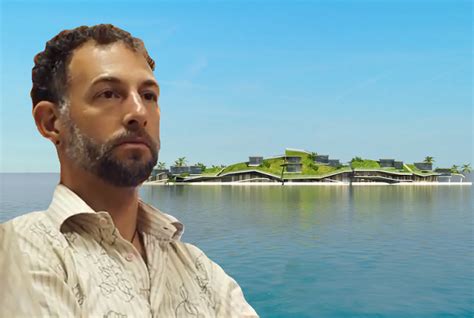 We have moved forward and are well positioned to develop the first seasteads. In the coming weeks, we should be able to make a joint announcement with the government on the best path forward for Blue Frontiers SeaZones and Seasteads in French Polynesia. We have also identified 51 nations we think would be suitable hosts in addition to, or as an alternative to, French Polynesia, said  Randy Hencken in an extensive interview for the „Free Reporter“ daily.

INTERVIEW WITH RANDY HENCKEN ABOUT THE FLOATING ISLAND PROJECT, May 2018

QUESTION: What is the current development of the project? Has the Blue Frontiers organization already received the French Polynesia government’s response to the materials (i.e. study of the economic impact, report and integration plan, legal framework for the innovative SeaZone) provided?

ANSWER: We submitted our economic impact report, environmental framework analysis, and legal research to the government of French Polynesia at the beginning of October 2017. We have had several meetings with the government afterwards and are in regular communication. Due to elections, which consumed the governments time and focus since January (2018), progress has been on hold at the governmental level.

The elections are over now – they ended May 6 – and the government we have worked with has maintained the majority. We expect to be able to get back to work on our requests imminently, and have already had meetings with the administration.
In the coming weeks, we should be able to make a joint announcement with the government on the best path forward for Blue Frontiers SeaZones and Seasteads in French Polynesia.

Even though getting an official response from the government of French Polynesia is taking longer than we had anticipated, we have moved forward and are well positioned to develop the first seasteads.

Our team continues to do design work, engineering research, and business development. We have also identified 51 nations we think would be suitable hosts in addition to, or as an alternative to, French Polynesia. We just launched special global web pages (https://www.blue-frontiers.global) to find entrepreneurs who can assist us in setting up other locations as host nations.

What would be the next steps of the Floating Island Project (FIP) / Blue Frontiers after obtaining the formal consent of French Polynesia?

Our roadmap is as follows. We expect to complete our crowdsale of Varyon by the end of June. The funds we raise will be used for engineering, design, and building the first prototype, as well as managing the legal requirements for our host nation. We expect to have the first prototype built by 2021 and to be able to manufacture and sell numerous seasteads after that.

This year we will acquire the SeaZone concession from French Polynesia, and possibly other nations. As a part of the SeaZone concession, we will get a land base where we can set up a base camp. Our team is preparing plans for how to efficiently set up the first base camp, and we anticipate being able to have seasteaders living near the SeaZone within a year.

Does FIP (Blue Frontiers) already have any candidates or participants who would confirm that they are moving to Floating Island? How many?

Thousands of people have expressed a desire to live full or part time on the seasteads. Our initially pilot project is envisioned for 300 people, plus the landzone, so we believe that we will have more demand than space until we can produce more seasteads.

Does FIP intend to act as a classical offshore – as the formal headquarters of many businesses for tax relief benefits and greater legal protection against unstable governments and volatile/unpredictable regulations?

It is our intention to create an innovative legal environment within the constraints of our host nation’s rules and concessions to us. We expect to be able to share our legal framework virtually with people who wish to register businesses or have some kind of e-residency with us.

What are the benefits of FIP for a citizen who wants to live in a free society?

It is our goal to offer residents as much autonomy in their personhood as we can within the framework afforded to us. Since the majority of people interested in seasteading have a proclivity for liberty, it’s safe to presume that we will create an environment where people who want to live in a free society will feel freer than most other places on earth.

Is it possible, that the aspect of freedom has gradually disappeared from the FIP project? Can it be understood that freedom has been gradually replaced by the „Special Economic Zone“, Ecology and Sustainability…?

When I joined The Seasteading Institute in 2011, our goal was to go out to international waters and create completely independent seasteads. While this is possible theoretically, the financial costs are too burdensome to achieve. In 2013 I decided that we should investigate starting the first seasteads in protected waters of a host nation where we can have a mutually beneficial relationship.

We would provide economic activity, environmental and social benefits, in exchange for a sufficient amount of autonomy to make the seasteading project interesting to those of us who want to pioneer seasteads. A special economic zone is a broad term that provides our host nation with a container for granting us some autonomy.

The lagoons and atolls we are considering for placement of seasteads are too amazing for us not to be concerned about the ecology. It’s a no barrier for us to promise to take care of the ecology around us. But it is also a great challenge for how we can develop and deploy floating technology to the thousands of communities who will be affected by rising seas.

What is the real main purpose of FIP? Economic benefits? Freedom? Attractive and ecological / exclusive environment?

The interesting thing about the company and community developing the first seasteads is that you could get a different answer from each of the individuals involved. For some people it is the desire to live in a freer place, for some it is pioneering a new society, for others it´s the love of the sea and a dream they’ve always had, and for others it’s developing solutions for environmental problems. While we plan to create a favorable economic environment, we aren’t competing with existing tax havens as our primary goal – it wouldn’t make sense to build a multi-million dollar floating village just to be a tax haven.

What are the benefits for a business company that would like to join the FIP project?

We will be in control of our purse, and we want to create an economic system where individuals and businesses voluntarily participate because they find our offering compelling.

Since we are building a new society, it makes sense for us to have our own cryptocurrency. Blue Frontiers commits to only accepting Varyon for the goods and services that we offer. If you want to buy a seastead from us, if you want to rent a night on a seastead, if you want to register your business in our SeaZone, if you need to pay us for a utility bill, you will do so with Varyon.

Holders of Varyon will also have referenda for important decisions that Blue Frontiers wishes to make regarding how we administer SeaZones. Varyon will be part of an immutable ledger on the Ethereum blockchain and can be traded and used independently of Blue Frontiers.

Your EMSI Impact Analysis study calculates taxes… Does your Special Economic Zone not count with a fully free tax zone / territory? What are the advantages of this SEZ, if not the tax? Just that the „FIP“ will not be subject to all France / French Polynesia regulations?

Will your „Floating Island“ – that cluster of several island platforms and coastal territories (called FIP) – have a special name? Can your project be considered a „city“? Free and independent floating city?

BASIC INFORMATION ABOUT THE SEASTEADING INSTITUTE AND THE FLOATING ISLAND PROJECT

The Floating Island Project consists of constructing ecological floating platforms in a lagoon of French Polynesia that could offer a „response to the challenges of rising sea levels and sustainable development“.

According the Blue Frontiers company, „these platforms would also provide a basis for homes, offices and infrastructure to encourage the formation of vibrant communities and explore new ways of living together“.

An independent company – Blue Frontiers – was created to develop and construct floating islands and to operate the seazone.

On January 13, 2017, The Seasteading Institute signed an exploratory agreement with the government of French Polynesia, and tasked Blue Frontiers with completing the legal, environmental, and economic studies which have been submitted.

In accordance with an MOU signed in 2017, Blue Frontiers, through its collaboration with The Seasteading Institute, completed a set of environmental, economic, and legal studies regarding the development and stationing of sustainable seasteads in French Polynesian waters, subject to a special regulatory framework granting them substantial autonomy.

Blue Frontiers proposed a floating island big enough for a dozen buildings. A hotel, restaurants, homes and offices designed for a few dozen residents. The pilot project is to become the nucleus of a floating city.

According Blue Frontiers company, French Polynesia is one of the promising countries and the company is cultivating relationships with this country in regards to stationing seasteads.

It is a tropical country of 118 islands in the Pacific ocean, where Blue Frontiers has identified a variety of suitable locations. It is outside the hurricane belt, has modern cabled internet connections, and many airline links to major cities including Los Angeles and San Francisco.

While one local community has recently expressed opposition, another which is concerned by sea level rise has also reached out to embrace FIP project

„Many more options are also being considered. One of our main goals for the first half of 2018 is to identify a specific suitable location to take the project to,“ said Blue Frontiers company.

Among its options are uninhabited locations, as well as others where company intend to establish mutually beneficial relationships with the local community and growing network of supporters.

The Seasteading Institute was founded in 2008 by PayPal founder, Peter Thiel and activist, software engineer and political economic theorist Patri Friedman, who is the grandson of Nobel Prize winning economist Milton Friedman.

Mr Theil, a venture capitalist who co-founded PayPal, has funnelled $1.25 million into the Institute and has previously called Seasteading an ‚open frontier for experimenting with new ideas for government‘.